The Adventure of Chewma and the Lost Treasures: chapter 5 The Flood

Chewma swam away from the pool and to a green door. when he yanked it open, the boiler room was flooded too, he swam to the ladder and gripped his flippers onto the bars and climbed up to the night club. Chewma threw a smoke bomb into the Night Club to warn everyone, and it did warn everyone. Soon the whole Night Club was flooded and the masked penguin was still chasing Chewma. Soon agents started to notice the flood coming from inside the Night Club. The agents knew not to open the door, they looked for another way to the night club. The agents used the manhole Chewma fell through to get to the night club instead of going through the door. they had to use their super-secret extra scuba gear that G gave them. when they got to the night club they found Chewma and the masked penguin fighting. After the masked penguin was tooken to HQ for questioning, Chewma found something in his pocket. it said "Traimian Tribes Treasures: Stone Puffle: Pot of the Ancients: Crystal of Kings. These treasures equal a mega exilar." Chewma couldn't read the rest of the note, but he did find a bit of yellow sand in his pocket too. Chewma now knew that the masked penguin was from the Traimian Tribes. He had a clue to his quest. The adventure had just begun.

This scene takes part in the boiler room, night club and cove
Posted by Blake at 2:51 PM 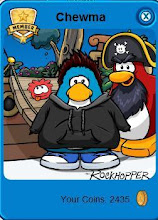